We’re very happy to use our equipment to make your designs. 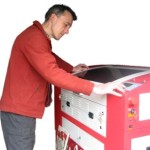 For those who are familiar with laser engravers – our machine is a 40 watt CO2 engraver with air assist. It has a 68cm by 40cm working area (but can work on longer pieces if they are less than 68cm wide and the ends can poke out of the machine). It can accommodate objects up to 20cm tall. The control software is Lasercut 5.3.

For those who are less familiar with laser engravers, this is what it is:

The heart of the machine is a long glass tube, a bit like a fluorescent lamp, which generates a beam of intense infra-red laser light. This laser beam is bounced off a series of mirrors which can be moved very accurately under computer control. The final mirror directs the beam down, through a focussing lens onto the surface of the work piece.

With up to 40 watts of laser light focussed on a spot a fraction of a millimetre across, it gets intensely hot. If the beam is moving quickly and / or the power is set low, it will engrave or scorch the surface. If the speed is lower or the power is higher, it can cut straight through. Different combinations of speed, power and material can produce different effects. Some materials are instantly vaporised so the engraved area is cleanly cut out as if carved. Other materials scorch, producing a blackened effect like branding or pyrography.

Air assist means that it can blow a jet of air at the work-piece to blow smoke away and cool the working area.

It needs a reasonably flat surface so that the beam remains in focus. A few millimetres of variation doesn’t matter, but curved or undulating surfaces are unlikely to work well.

The head follows the path, cutting as it goes. Lower power and higher speed can be used to mark a fine line rather than cutting through. Higher power and lower speed is used to cut.  The accuracy of positioning the beam is better than 0.01mm so fine results can be achieved.

It’s a very versatile piece of equipment. It can cut acrylic, felt, thin wood, thin plywood, MDF, leather and many plastics. It can engrave all the above plus glass and stone.

There are really only two no-nos:

– anything containing chlorine (such as PVC and neoprene) as it produces nasty hydrochloric acid gas when burned
– metals. It won’t do any harm but won’t do any good either as the laser beam will have no effect on it

For unfamiliar materials it’s useful to have a sample to run trials on.  This way we can check that we are able to achieve the desired effect, and to optimise the settings.  This is particularly important if engraving an expensive or unique object.

The machine is controlled by Lasercut 5.3 and CorelDraw X4. CorelDraw uses its own ‘cdr’ files but is pretty good at importing other formats including DXF, SVG and PDF.

If you don’t already have vector design software it’s worth considering Inkscape which is a powerful free drawing tool which produces SVG files.

The machine treats each colour in the drawing as a separate layer. For each layer we can set whether it should be cut or engraved, the speed and power settings and the order they are executed. It’s best to stick to a small number of distinct colours, thin lines (<0.2mm) and no fill. 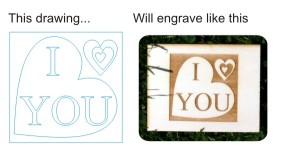 For cutting, the laser beam simply follows the lines.

Good drawing – this will etch the floral design and the leaves, leaving the leaf veins un-etched, and cut out the heart shape.

Example of a design that will engrave well

Bad drawing – the flower will not engrave because it’s an open path. The leaves will engrave badly because they overlap.

Example of a design that will not engrave well

Cost depends on the price of the material (if you are not providing your own) and the time the job takes.  We can produce a suitable digital design using your drawings or ideas.   However, if you can send us a file that is ready to use with little or no extra work, that will obviously be cheaper.

The time taken to run the job is hard to predict, but if you send us a design file we’ll be happy to give you a firm price.